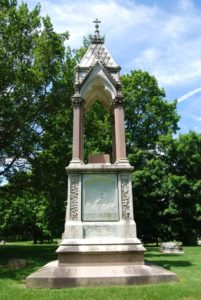 The Gothic monument, designed by noted architect Richard Upjohn, is in the style of a ciborium or freestanding canopy supported by columns which covers a church altar. Erected in 1868, the memorial features marble relief carvings depicting The Passion of the Christ or the events and suffering of Jesus during his trial and crucifixion. The sculpted work is by John Moffit who also designed the Stedman Memorial at Cedar Hill.

Praise for the Monument

The Hartford Courant eloquently described the Beach Monument in 1868: “Although its unique style excites one’s admiration from a distant view, it requires a near approach to appreciate fully its artistic excellences…the work is most exquisite in detail throughout, and the entire design perfectly harmonic in proportion, material and execution…the monument is a most generous tribute to the memory of the departed, and a substantial and beautiful structure for the preservation of a family name.”

The Courant also noted “a Scotch granite pedestal under the canopy will probably someday be surmounted by an appropriate sculptured figure,” but a statue was never installed.