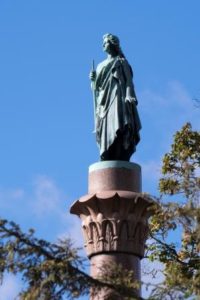 The resulting monument features a foundation stone of fine-grained, tooled white-gray granite and a pink Scottish granite column leading from the foundation to a bronze sculpture. The sculpture atop the monument is a bronze angel, The Angel of Resurrection, designed by American sculptor Randolph Rogers.

The angel is anchored on top an Egyptian Revival architectural base, which includes two serpents wrapped around a central globe. The front of the granite monument is adorned with a bronze sculptural rendition of the Colt crest.

Although the monument was erected in 1867, no one was buried in the Colt lot until 1894 when Elizabeth Colt’s only surviving son died. It was at that time that Elizabeth had Sam and her other four children removed from their family plot at Armsmear and interred at Cedar Hill.