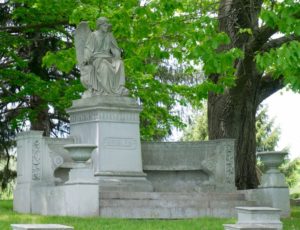 The monument is an exedra or curved bench. In ancient Greece, exedras were often used in public squares and were popular spots for the gathering of philosophers and teachers. They were also used in Greek burial grounds.

In American cemeteries, exedras were popular in the late 19th century up until the 1920s. This example dates from between 1912 and 1914 and is the work of New England Granite Works.

The statue, of the angel Gabriel, is by Carl Conrads, New England Granite Works’ house sculptor. Although without the horn that usually denotes Gabriel, the statue is very similar to a sketch of the angel designed by Conrads for a Troy, New York monument.

Gilbert F. Heublein was a prominent hotelier and restaurateur in Hartford. He was also a successful food and liquor distributor and is credited with bringing A-1 Steak Sauce and Smirnoff to the United States. To learn more about Heublein, click here.