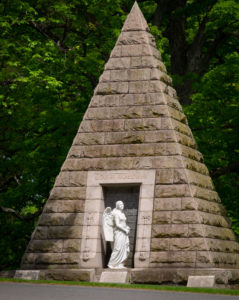 Fashionable throughout the 19th-century and into the 1920s, the Egyptian Revival style incorporated motifs and imagery of ancient Egypt. Napoleon’s campaign into Egypt (1798-99) included a scientific expedition resulting in publications in the early 19th century. These publications led to the incorporation of Egyptian motifs such as the obelisk, hieroglyph, sphinx, and pyramid into architecture and decorative arts.

With its funerary symbolism the style was often seen in cemeteries, most notably in the form of the obelisk. The obelisk is a tall, four-sided, narrow tapering monument which ends in a pyramid-like shape at the top. Obelisks were prominent in the architecture of the ancient Egyptians, who placed them in pairs at the entrance of temples. The obelisk symbolized the sun god Ra.

Like the obelisk, the pyramid references the rays of the sun. The pagan origins of the Egyptian Revival style aroused some concern about its use. To appease the religious community, designers of Egyptian Revival funerary art often added Christian symbols such as angels, Jesus or the Virgin Mary.

The Howard Pyramid, by New England Granite Works, features an angel to escort you through the door to heaven. Other symbolic motifs include inverted torches on either side of the doorway to represent life extinguished and butterflies on the front steps to symbolize resurrection.