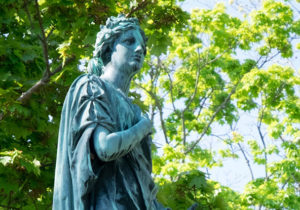 The Hartford Courant (1874) described the Jewell Monument as an “exquisite Corinthian column of granite surmounted by a bronze statue of Hope.” The Corinthian order was an Athenian invention from around 500 BC, but was developed into its full ornamentation by the Romans. The column capitals are carved representations of leaves of the acanthus, one of the plants most often associated with funerary architecture. Its leaves represent overcoming the trials of life and death.

The bronze Statue of Hope, with its requisite anchor, is the work of Carl Conrads, house sculptor for New England Granite Works. Born in Germany, Conrads graduated from the Academy of Fine Arts in Munich before arriving in New York City in 1860. After serving in the Union Army from March 1861 to June 1863, Conrads moved to Hartford to work with James Batterson, owner of New England Granite Works. Conrads, who was employed as house sculptor from 1866 to 1903, joined the firm as it prepared for the post-Civil War demand for cemetery and other monuments.

To learn about the popular monuments of Faith, Hope & Memory, check out our video here.