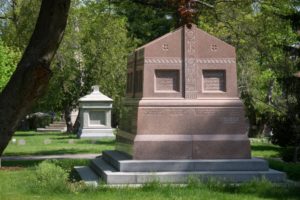 Made of Nova Scotia granite, the Morgan Monument is said to represent John Pierpont Morgan’s vision of the Ark of the Covenant.

Born in Ireland, Keller immigrated to New York City with his family as a child. He trained in the offices of several New York architects before coming to Hartford to design monuments for Batterson. He worked for Batterson from 1866 to 1872.