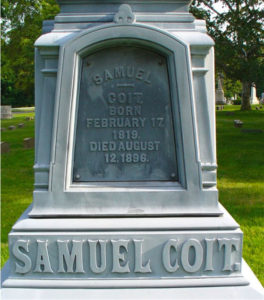 The hollow metal monument that graces the lot of Samuel Coit is commonly called a zinkie. It is named after the cast zinc (white bronze) of which it is made. Zinkies were less expensive than traditional monuments. Customers could simply flip through a catalogue to “build” their perfect monument.

The Monumental Bronze Company in Bridgeport, Connecticut was the only company to make zinkies. They produced the monuments between the mid-1870s to the start of World War I. At that time, the manufacturing facility was needed to make weapons for the war and could no longer produce monuments. Following the war, the company was never able to revive the zinkie.