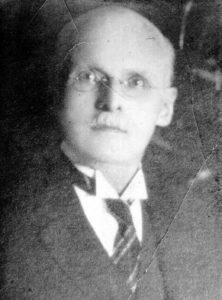 Albert Entress was born in Rottenberg, Germany. He immigrated to the United States in 1868 after completing an apprenticeship as a stone carver. He spent five years in New York and came to Hartford in 1873.

Around 1876, architect George Keller went to New York to find an expert stone carver. He was told that one of the best in the country resided in his own city of Hartford. This was the beginning of a relationship that lasted the rest of Entress’ career.

Entress is probably best known for his work on the Soldiers and Sailors Memorial Arch in Bushnell Park, which Keller designed. Entress carved the six statues on the tower’s sides.

Entress worked with Keller on the Hartford Public High School in 1883. When the building was demolished in 1961, the only carving spared was a brownstone owl that had been placed over the main door.

Entress also worked with Keller on projects in other cities, including the Garfield National Memorial in Cleveland and the Soldier’s Memorial Arch in Buffalo.

Entress was chosen to sculpt the magnificent artwork designed by Augustus Saint-Gaudens for the top of the Edwin Denison Morgan mausoleum at Cedar Hill Cemetery.

In August 1894, about three weeks before its completion, the shed in which the artwork was being sculpted went up in flames. Made of marble, the sculpture was destroyed.