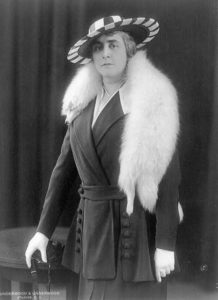 Born in New York, Anne Tracy Morgan was the daughter of financier J. Pierpont Morgan and his second wife Frances Tracy Morgan. Although she grew up amidst wealth and social advantages, in her mid-twenties she became active in organizations devoted to helping others.

In 1903 she joined Elisabeth Marbury, Florence J. Harriman, and others in organizing the Colony Club, New York’s first social club for women. Although an exclusive organization for upper class women, many Colony Club members supported the women shirtwaist strikers in 1909 and 1910. Wealthy women, including Morgan, donated much-needed funds to the strikers and eventually joined the picket line.

A Friend of France

As a friend of France, Morgan was widely honored for her devotion to the victims of both World Wars.

During World War I, she established the American Fund for French Wounded and the American Friends for Devastated France. That organization relocated the homeless, built orphanages, kindergartens, and clinics and helped to restock and equip farms. As its head, Morgan carried the major burden of the work and in 1918, was awarded the Croix de Guerre.

After the war, Morgan stayed in France to continue her work. In 1924, the French government conferred the Legion of Honor on her.

In anticipation of World War II, Morgan organized the American Friends of France in 1939. She directed the work of this group and had three relief centers ready when war broke out. She assisted in the evacuation of thousands of Belgian and French refugees from occupied to unoccupied territory.

Forced to leave the country in 1940/41, Morgan returned later to supervise postwar activities. She traveled frequently between the U. S. and France between 1945 and 1948. Ill health forced her to return to the U.S. in 1948.