Education, Healthcare
Back to all Notable Residents 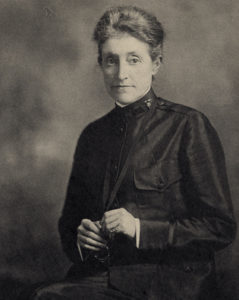 Born in New Jersey, Annie Warburton Goodrich’s family first moved to Hartford when she was 8 years old. Six years later, they moved to England and later, France. The family returned to Hartford in 1883.

As the companion of Mrs. ASC Blake of Boston, Goodrich traveled throughout the United States and Europe. Upon her return from one of these trips, she found first her sisters and then her grandparents ill. Soon after, her father became ill and the family finances began to falter.

Wishing to become self-sufficient, and having observed the poor nursing care her grandfather received, Goodrich enrolled at the New York Hospital School of Nursing in 1890. She knew that nursing was a viable career for a woman during a time when few other options existed. She graduated in 1892.

Her first job was as nursing superintendent at the New York Post-Graduate Hospital. She later served as superintendent at St. Luke’s Hospital, taught at Columbia University’s Teachers College, and served as director of the Henry Street Visiting Nurses Service.

As the U. S. entered World War I, the Surgeon General of the Army appointed Goodrich the Chief Inspecting Nurse of the Army Nurses Corps. She inspected 136 military installations prior to creating a plan for the Army School of Nursing. The War Department awarded her the Distinguished Service Medal for her work.

Throughout her career, Goodrich advocated for the replacement of the then standard practical, hospital-based training with a university-based or professional-school education. In 1923, a landmark report on nursing education determined that hospital-based training program favored the needs of hospitals over the educational needs of students. Goodrich served on the committee responsible for the report.

The report led to the creation of an experimental nursing program at Yale University. In 1923, Goodrich was offered the position of dean. She was Yale’s first female dean. Over the next ten years, she developed the program into the world’s first graduate school of nursing.

After leaving Yale, Goodrich lectured at schools and visited hospitals around the world. At the New York World’s Fair in 1939, she was honored as one of the 12 outstanding women of the past 50 years. During World War II she helped organize the Cadet Nurse Corps.

Over the course of her career, Goodrich was active in local, state, national, and international nursing organizations. She served as president of the American Nurses Association and the Association of Collegiate Schools of Nursing

Goodrich was inducted into the American Nurses Association Hall of Fame in 1976.