Theater
Back to all Notable Residents 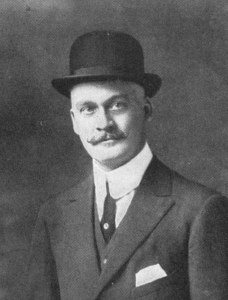 Born in Hartford, Charles B. Dillingham was one of the leading theatrical producers in New York City during the first three decades of the 20th century.

Dillingham got his start as a theater critic. He was writing reviews for The New York Evening Post when he became a manager for several prominent performers, including classical actress Julia Marlowe.

Dillingham began producing theater in 1903. With his company, the Dillingham Theatre Corp., and in partnership with A.L. Erlanger and Florenz Ziegfeld, he produced more than 200 comedies, musical comedies, operettas, and vaudeville shows for the Broadway stage.

Dillingham produced nine musicals by composer Victor Herbert. He played a major role in promoting the careers of composers Jerome Kern and Irving Berlin. He also worked extensively with the dance team of Adele and Fred Astaire.

Dillingham built and owned The Globe Theatre, the only Broadway house ever to have a removable roof. For many years he managed The Hippodrome, reputed to be the largest theatrical house in the world.

Financially ruined by the Great Depression, Dillingham made a comeback with the hit revue New Faces in 1934. He died shortly thereafter of bronchopneumonia at the Hotel Astor in New York City.

The Cyber Encyclopedia of Musical Theatre, TV and Film. Accessed at http://www.musicals101.com/who11.htm