Writer
Back to all Notable Residents 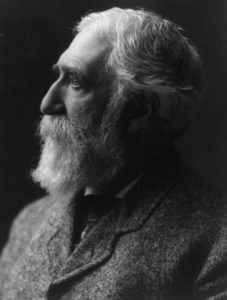 Charles Dudley Warner was born in Plainfield, Massachusetts. His father passed away when he was five, and his mother sent him to live with a guardian in Charlemont, Massachusetts. He later went to live with his uncle in Cazenovia, NY. He attended Hamilton College where he met his life-long friend Joseph Hawley.

After graduating from Hamilton in 1851, Warner worked in printing and publishing establishments. Hoping to improve chronic health problems, he joined a surveying company and moved to Missouri in 1853. He returned to New York State in 1855 and worked in real estate while reading law. He married his high school classmate Susan Lee in 1856. At some point he moved to Philadelphia where he studied law and graduated from the University of Pennsylvania Law School in 1858. He practiced law for two years in Chicago, but found it unprofitable.

In 1860, Joseph Hawley offered his friend the position of assistant editor of The Evening Press in Hartford. Warner happily accepted the job and moved to Hartford where he became part of the Nook Farm circle. The next year he became editor and remained in that position until The Evening Press was merged with The Hartford Courant in 1867 and he became co-editor of The Courant with Hawley.

Warner always enjoyed writing. While in college, he published a few articles in the Knickerbocker Magazine. During the Civil War, he contributed essays to The Courant that focused on lighter, domestic fare in an attempt to distract the readers from the conflict.

In 1870, The Courant published a series of Warner’s essays about working in his garden. The light humor and philosophical tone made the series popular, and Reverend Henry Ward Beecher suggested they be published. The collection called My Summer in a Garden became a bestseller.

By 1880, Warner was one of the country’s most popular authors. He published essays, as well as novels, biographies, memoirs, and nine travel books. In 1884 he became a contributing editor to Harper’s Magazine. Warner also wrote about social issues. He was interested in prison reform, and in an essay titled “A Study in Prison Management” published in 1885, he wrote of his support for flexible, open-ended sentences.

Warner is probably best remembered for his collaboration with Mark Twain on the satirical novel The Gilded Age. The two first met in 1868 when Twain came to Hartford and tried to buy a share of The Courant. Hawley and Warner turned him down. Twain and Warner later became close friends. It is said that their wives challenged them to write a better novel than what they were used to reading, and The Gilded Age was the result.

Warner is also remembered for many quotes, including “Everybody talks about the weather, but nobody does anything about it.” This is typically attributed incorrectly to Mark Twain. Warner also said “Politics makes strange bedfellows,” and “The only thing raised on City land is taxes.”

On October 20, 1900, Warner collapsed during an afternoon walk and died. Mark Twain served as a pallbearer at his funeral.