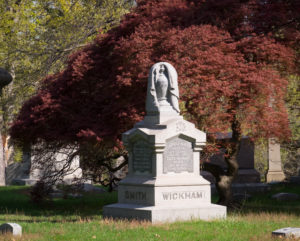 Born in New Haven, Clarence Wickham resided in Manchester and Hartford during his childhood. After graduating from Hartford Public High School in 1879, he followed in his father Horace’s professional footsteps.

Wickham worked at United States Envelope Company and Plimpton Manufacturing Company. There he became supervisor of the stamped envelope division.

He then became secretary and treasurer of the Hartford Manila Company, formed in 1881 and which later became the Wickham Manufacturing Company.

Wickham inherited his parents’ country home, the Pines, built in 1896. The 130-acre estate on the Manchester and East Hartford line became Wickham Park as designated by his will. Today the park contains 250 acres of gardens, open fields, woodlands, ponds, picnic areas, sports facilities, and other attractions.

The History of Wickham Park accessed at http://wickhampark.org/the-history-of-wickham-park/