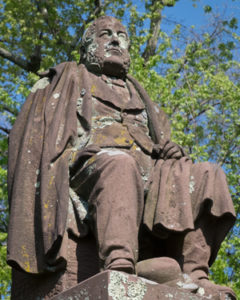 Daniel Russell owned the Portland Brownstone Quarry, which he inherited from his father Timothy.

Cutting stone in Portland, Connecticut began in the 17th century with commercial quarrying being established in the 18th century. The Portland quarries, which supplied a superior quality stone, were an important source for construction in the second half of the 19th century. Portland stone was used in landmark buildings, mansions, and middle class homes in major U. S. cities.

Daniel Russell died in 1869 and was originally interred at a cemetery in Portland. He was disinterred and moved to Cedar Hill in 1872.

His monument is the only memorial at Cedar Hill featuring a life-size likeness of an actual person. It features a statue, in a sitting posture, of Daniel Russell. Frederick Russell erected the monument in memory of his father.