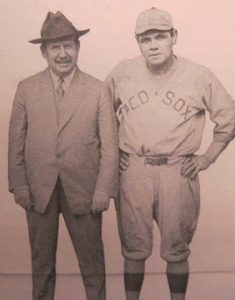 DeWitt Page began his career as a salesman in Hartford and New Britain stores. He later sold insurance. In 1891, he went to Bristol to join New Departure as a shipping clerk.

The New Departure Bell Company was established in 1889 when Florida hardware retailer Albert Rockwell selected Bristol to manufacture a doorbell he invented.

Page worked his way through various departments, eventually becoming sales manager. As such, he was largely responsible for the rapid growth of the company.

Page was one of the wealthiest men in Bristol. He, and his wife May Rockwell, were very philanthropic. They gave a solarium to Bristol Hospital and land and $271,000 to Bristol for an extensive park.