Aviation, Business
Back to all Notable Residents 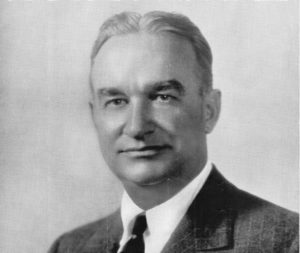 Born in Berlin, Wisconsin, Donald L. Brown was an early innovator of aviation.

As a young man, Brown worked as a newspaper carrier, journalist, store clerk, and steel worker. After attending Northwestern University, he started his aviation career at Simplex Automobile Company.  He served as head of engine assembly. He later became a factory manager for Wright Aeronautical Corporation.

Brown held several positions within the aviation industry before co-founding Pratt & Whitney Aircraft Company. In 1925, Pratt & Whitney Tools loaned $250,000, use of its name, and space in its building for the new venture.

With Frederick Rentschler and others, Brown sought to produce lighter-weight engines with greater power. Its first engine, the 425 horsepower R-1340 Wasp, powered the aircraft of many record flights.

In 1930, Brown became president of United Aircraft Corporation (the later name of Pratt & Whitney Aircraft). As president, he led the company to become one of the world’s largest producers of airplanes, engines, and propellers.