Healthcare
Back to all Notable Residents 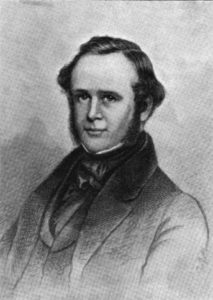 Born in Vermont, Horace Wells studied dentistry in Boston. He began practicing in Hartford in 1836. A talented practitioner, Wells soon became one of the city’s most successful dentists.

On December 10, 1844, Wells attended an exhibition where members of the audience were administered nitrous oxide, or laughing gas. They would then provide the evening’s “entertainment” while under its influence. Wells noted that one individual under the influence had cut his leg but, feeling no pain, was unaware of it. He immediately grasped the implications of his observation and was determined to explore its possibilities.

The following day, Wells invited John Riggs and Gardner Colton to his office. He asked the gentleman to administer nitrous oxide to him and then extract a tooth that had been bothering him. Under the influence of nitrous oxide, Wells felt no pain during the procedure. After this, both Wells and Riggs used the gas frequently to painlessly extract teeth.

In 1845, Wells traveled to Massachusetts General Hospital to demonstrate the use of nitrous oxide in a surgical operation. Unfortunately, the patient cried out during the procedure. The audience booed and jeered, and Wells departed disheartened.

Shortly thereafter, William Morton, who had been associated with Wells for a brief time, began working with Charles Jackson to manufacture an anesthesia that combined nitrous oxide and ether. This formula was successfully used in operations at Massachusetts General. The two sought to establish themselves as the discoverers of the principle of anesthesia. Wells disclaimed their assertion on the grounds that their product was nothing more than his original nitrous oxide compound.

Of a high strung and sensitive nature, Wells became increasingly unstable and distraught. He soon began to inhale nitrous oxide and chloroform both experimentally and to ease stress. By January 1848, Wells had moved to New York City where he practiced from an office in his residence.

On January 21, while under the influence of chloroform, Wells was arrested for throwing acid at two women on Broadway and was taken to “the Tombs.” The following day Wells was permitted to return home to retrieve a razor and other personal necessities. Unknown to his guard, he also retrieved a bottle of chloroform.

Wells attended church services in the Tombs on Sunday. Later that day he self-administered the chloroform and cut the major artery in his leg, thus, committing suicide. He was 33 years old.

A debate surrounding the beginnings of anesthesia continued after the death of Horace Wells. He was eventually recognized for his discovery by the American Dental Society in 1864 and the American Medical Association in 1870.

Learn more about Horace Wells on a Walk Through Hartford.