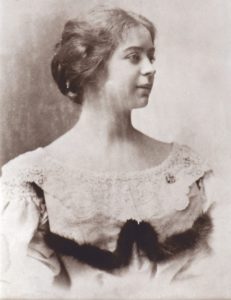 Daughter of wealthy silk manufacturer Ira Dimock and his wife Lenna, Edith grew up in the Cornelius Vanderbilt mansion in West Hartford. After graduating from Miss Brown’s Boarding and Day School in New York, she decided to pursue a career in art. She enrolled in the Art Students League of New York and studied painting with William Merritt Chase.

Primarily working in watercolors enhanced by gouache and black crayon, many of Edith’s paintings were character studies of women and children of the lower and middle classes. Her work was exhibited in numerous shows including the Independent Show of 1910 and the Armory Show of 1918. She also illustrated two children’s books.

Edith was married to the prominent artist William Glackens for over 30 years. Grief stricken upon his death in 1938, she tragically destroyed much of her own work. She devoted herself to his legacy for the remainder of her life.