Architect
Back to all Notable Residents 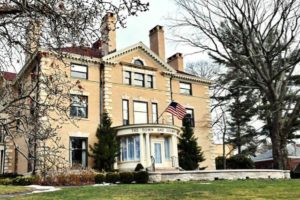 Edward Hapgood was a prominent architect in Hartford and West Hartford, Connecticut.

A New York native, Edward was educated in public schools before entering the New York office of George Martin Huss, a well-known architect. He studied three years with Huss as well as at the Metropolitan Museum of Art. He then operated his own New York office between 1889 and 1893.

Edward moved to Hartford in 1893, forming Hapgood & Hapgood with his cousin Melvin. The firm had more than 300 commissions from Maine to Colorado between 1893 and 1899. They designed houses, libraries, office buildings, and churches.

They were also involved with decorative arts such as wallpaper, woodwork, stained glass, and frescoes. They worked in a variety of styles including Gothic Revival, Italianate, Queen Anne, and Tudor Revival. Edward excelled at Colonial Revival.