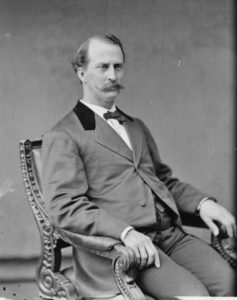 Edward Miner Gallaudet was the son of Thomas Hopkins Gallaudet, founder of the American School for the Deaf, and Sophia Fowler, one of his early pupils.

After graduating from Hartford High, Gallaudet worked at a bank. Unsatisfied, he quit the job after three years. He joined the staff at the American School for the Deaf. While teaching, he attended Trinity College.

In 1857, U.S. politician Amos Kendall donated land for the establishment of a school for the deaf and blind in Washington, D.C. Familiar with Gallaudet’s success in teaching the deaf, Kendall asked him to lead the new school. Gallaudet became the first principal of Columbia Institution for the Deaf and Blind.

Gallaudet presided over the first commencement in June 1869 when three young men received diplomas. Their diplomas were signed by President Ulysses S. Grant. To this day the diplomas of all Gallaudet graduates are signed by the presiding U.S. president.

Gallaudet was associated with the school for more than 50 years. He was the leading advocate of the “combined system” which included speech and speech-reading (oral teaching) and sign language – he maintained that no single method was suitable for all deaf children.

After retiring from Gallaudet College, he returned to his hometown of Hartford.