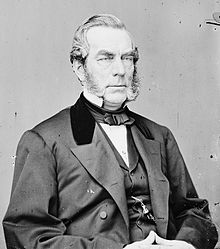 Edwin Denison Morgan’s business career began in 1824 when his uncle hired him as a clerk in his Hartford grocery store. By 1832 he was his uncle’s partner. He also ventured into politics, having been elected to the Hartford city council.

Morgan moved to New York City in 1836. There he established a wholesale grocery firm, and later an import house and brokerage and securities business. In 1849, he ventured into politics again when he was elected a member of the New York City Board of Assistant Aldermen. In 1850, Morgan was elected to the first of two terms in the New York State Senate.

Morgan began his political career as a member of the Whig Party. After the party declined, he switched to the newly-formed Republican Party. He was named chairman of the New York State Republican Committee, which oversaw the party’s financial and fundraising activities. Within a year, he also assumed the position of chairman of the Republican National Committee.

In 1858, Morgan was elected governor of New York. His first term was noted for his successes in improving the state’s credit, strengthening its canal system, and making prisons, insurance companies, and charities more effective. These accomplishments, along with divided Democratic opposition, resulted in his reelection by a large plurality.

His second administration was largely devoted to military matters with the outbreak of the Civil War. As commander in chief of the New York State Militia, he responded to President Lincoln’s call for volunteers to serve by enrolling and equipping 320,000 men.

Morgan declined to run for a third term in 1862, instead successfully seeking the United States Senate seat vacated by Preston King. He never became a leader in the Senate as he had in the Executive Chamber. In 1869, he was defeated for reelection after a bitter contest with ex-Governor Reuben Eaton Fenton.

Morgan served again as chairman of the Republican National Committee from 1872 to 1876. In 1876, he was nominated for governor, but was defeated by Lucius Robinson. When Chester A. Arthur succeeded to the presidency in 1881, he nominated Morgan for Secretary of the Treasury. Although he was confirmed unanimously by the Senate, he refused the position.

The last few years of his life were devoted to philanthropic endeavors and patronage of the fine arts.


Biographical Directory of the United States Congress. Accessed at http://bioguide.congress.gov/scripts/biodisplay.pl?index=M000949

Harrold, Thomas.  “Governor Edwin Denison Morgan and the Recruitment of the Union Army in New York State.” Accessed at http://www.albany.edu/nystatehistory/44/gov_recruit.html