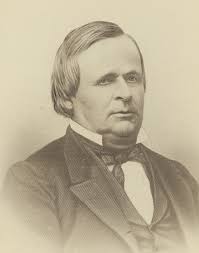 Born in Colchester, Eliphalet Adams Bulkeley graduated from Yale in 1824. A lawyer, he was president of East Haddam Bank. He served in the state senate, as speaker of the house, and as school-fund commissioner.

In 1846, Bulkeley helped establish the Connecticut Mutual Life Insurance Company. The first life insurance company in the state, he served as president.

A year later, Bulkeley became director and general counsel of Aetna Insurance Company, which offered fire insurance. In 1850, he helped create and manage a subsidiary within Aetna that offered life insurance. Within three years, the company had grown into the Aetna Life Insurance Company. Bulkeley was named president.

Bulkeley is credited with building a financially sound company that was able to survive the claim demands of the Chicago Fire of 1871. Eleven companies in Connecticut had written insurance policies covering life and property in Chicago. The fire resulted in seven of eleven companies going out of business. While Aetna witnessed its capital reduced by half as a result of the fire claims, the company was able to pay every claim as committed and stayed in business.