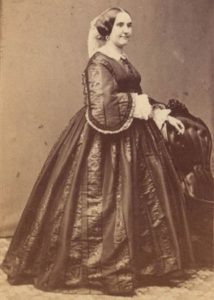 Elizabeth Hart Jarvis was the first child born to William and Elizabeth Miller Hart Jarvis. Her father was a noted Episcopal minister. Her mother was from a prominent family that included several Rhode Island royal governors as well as wealth from the West Indies trade.

In 1856, Elizabeth married Samuel Colt who invented the Colt revolver and established Colt Armory in Hartford. Their marriage ended in 1862 when Sam died.

When Sam died, Elizabeth was one of the richest women in the country having inherited an industrial empire. She helped manage Colt’s Patent Fire Arms Manufacturing Company from behind the scenes.

When the armory burned in 1864, it was Elizabeth who had insured the building beforehand. She managed its reconstruction, including making it fireproof and recreating the blue onion dome.

In addition to overseeing a multi-million-dollar business, Elizabeth was a prominent philanthropist and patron of the arts.