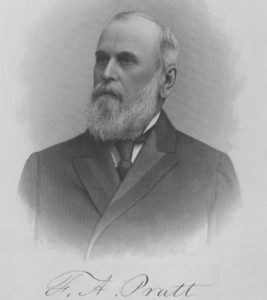 Born in Vermont, Francis Pratt’s family moved to Lowell, Massachusetts when he was 8 years old. When old enough, he apprenticed to Warren Aldrich to learn the machinist’s trade.

In 1848, he began working at Gloucester Machine Works, where he rose to the position of contractor. Four years later (1852), he moved to Hartford where he secured a position at Colt’s Manufacturing Company. It was at Colt that Pratt met Amos Whitney.

Both Pratt and Whitney left Colt in 1854. They took positions at Phoenix Iron Works for the opportunity to do contract work. Pratt became superintendent of Phoenix.

In 1860, the duo began manufacturing machinery resulting in the founding of Pratt & Whitney. The company was formally incorporated in 1869. They manufactured guns and gun making machinery, as well as tools to make sewing machines, putting into practice the concept of interchangeable parts.

Pratt & Whitney is credited with being instrumental in bringing about the adoption of a standard system of gauges in the United States and Europe. Pratt served as president of the company.

Pratt, who showed considerable aptitude for inventing, held several machine-tool patents. His most important invention was a metal planing machine (1869).