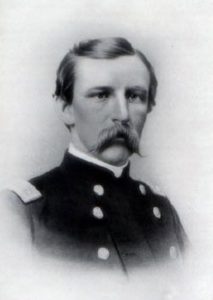 Griffin A. Stedman was born in Hartford and attended Trinity College. When he graduated in 1859, he moved to Philadelphia to read the law.

Following the attack on Fort Sumter in 1861, which signaled the beginning of the Civil War, Stedman joined the Washington Greys. Upon learning that Colonel Samuel Colt of Hartford was raising a regiment for the 14th U.S. Infantry, he transferred to that command in May 1861.

Colt’s infantry was not successful and was disbanded. As a result, the 5th Regiment of Connecticut Volunteers was called to active duty. Stedman, who had attracted the attention of superiors, was commissioned captain of Company I. He and his regiment left Hartford on July 29, 1861 and were charged with covering threatened points along the Potomac.

Continuing to impress his superiors, Stedman was selected to command a detachment across the river to cover the retreat of forces after the disaster at Ball’s Bluff. This was a delicate mission as it was difficult to accomplish without sacrificing a portion of the picket line. Under his command, Stedman successfully withdrew the picket line bringing back every man.

In November 1861, Stedman was promoted to major of the 11th Regiment. In June 1862, he was promoted to lieutenant colonel. He served in the Battle of Antietam. Having command of the right wing of the regiment in the attack on Stone Bridge, he led the charge by which it was captured. Stedman was severely wounded during the battle but refused to leave the field until the regiment was relieved.

In September 1862, Stedman was promoted to colonel and was in command at the Battle of Fredericksburg. Over the next couple of years, he was ordered to Newport News, Suffolk, the Battle at Swift’s Creek, the Battle at Drury’s Bluff, and the Battle at Cold Harbor.

On June 15, 1864, Stedman was present at the capture of a portion of the defenses of Petersburg and subsequently was engaged in the battle. On August 5, at the Battle of Petersburg, he was struck in the stomach by a bullet. As he lay dying, he received word of his commission to general.

General Griffin Stedman died on August 6, 1864 at the age of 26. His remains were sent under escort to New London, Connecticut and were laid to rest with military honors in Cedar Grove Cemetery. In 1875, his remains were removed and he was interred in the family lot at Cedar Hill Cemetery.

The Union Army: A History Of Military Affairs In The Loyal States 1861-65—Records of the Regiments in the Union Army—Cyclopedia of Battles — Memoirs of Commanders and Soldiers, Volume I, Maine, New Hampshire, Vermont, Massachusetts, Rhode Island, Connecticut, Pennsylvania and Delaware.  Madison, WI: Federal Publish1ng Company, 1908.