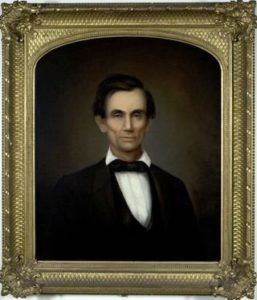 After receiving a classical education, George F. Wright opened an art studio in Wallingford, Connecticut. In 1847, he moved to Hartford and accepted the position of custodian at the Wadsworth Atheneum.

Wright’s specialty was painting portraits. To perfect his art, he studied at the National Academy Museum & School of Fine Arts in New York as well as with portraiture masters in Germany and Italy. His artistic reputation led to him serving as the portrait artist for several Illinois and Connecticut governors.

When Abraham Lincoln was elected president, artists were clamoring to paint his portrait. Unable to accommodate separate sittings, Lincoln agreed to a free-for-all portrait session. Artists painted his portrait while he sat for them all.

Story has it that of all the portraits done, Lincoln purchased only one – the one by George F. Wright. He presented it as a gift to family friends. According to the current owners, the painting was the only oil portrait that Lincoln ever purchased.