Advocate, Military, Politics
Back to all Notable Residents 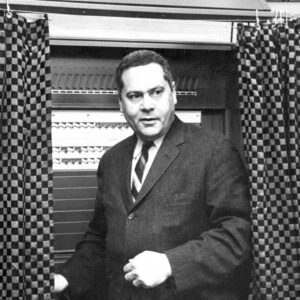 George Ritter was a graduate of Rutgers University and Yale Law School.

His law school education was interrupted by his service in World War II. He was a staff sergeant in the U. S. Army. He earned three battle stars in Guadalcanal, New Guinea, and the Philippines.

In 1949, Ritter began organizing unions as executive secretary of the Connecticut Chapter of the American Federation of County and Municipal Employees. He organized some of the first municipal unions for police, firefighters, and teachers.

Ritter held public office for 21 years and practiced law for more than 50 years. He was an attorney for Rev. Martin Luther King, Jr. at the beginning of King’s career.

In 1956, he was appointed Hartford Corporation Counsel. He later served on Hartford City Council (1959- 1968) and represented the city of Hartford in the Connecticut General Assembly (1968-1980).

He was an advocate for civil rights, elder and juvenile justice, labor law, women’s rights, and government accountability.

Ritter recruited and managed campaigns of the first minority candidates to run for Hartford City Council and Board of Education.

In the 1960s, Ritter and his wife Patricia, started the Connecticut Housing Investment Fund. The organization, which became a model for national programs, financed integrated and affordable housing and neighborhood revitalization projects throughout Connecticut.

He was a founding board member, along with Jackie Robinson and Eleanor Roosevelt, of Modern Community Developers, granting seed money to developers selling homes to minorities.