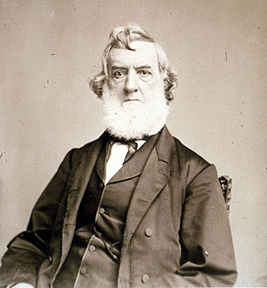 Gideon Welles was born in Glastonbury, Connecticut. He earned his degree from Norwich University and became a lawyer by “reading the law.” In 1826, he founded the Hartford Times, serving as its editor.

Welles started his political career in 1827 as a Democrat, serving in the Connecticut State Legislature. He held office until 1835, when he was appointed Comptroller of Public Accounts. Between 1836 and 1841, he was Postmaster of Hartford. He was elected Comptroller (now an elected office) in 1842. In 1846, President James K. Polk appointed him Chief of the Bureau of Provisions and Clothing for the Navy. He served until 1849.

In 1854, Welles joined the newly established Republican Party. He founded the Hartford Evening Post in 1856 to advocate for party views. An active member on both the state and federal level, Welles was opposed to the extension of slavery into new territories. He was chairman of the Connecticut delegation to the convention at Chicago which nominated Abraham Lincoln president.

Secretary of the Navy

In March of 1861, newly-elected President Lincoln named Welles Secretary of the Navy. He served in this Cabinet position until 1869. During his tenure, Welles is credited with modernizing the navy. He implemented some of the founding principles upon which the navy still functions. In addition to establishing order, he expanded the navy almost tenfold.

After leaving office, Welles returned to Connecticut. In Hartford, he wrote, edited his journals, and authored several books, including Lincoln and Seward published in 1874.