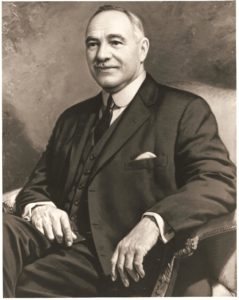 German-born Gilbert F. Heublein was a prominent hotelier and restaurateur in Hartford. He was also a successful food and liquor distributor. He is credited with bringing A-1 Steak Sauce and Smirnoff Vodka to the United States.

Heublein’s father, Andrew, founded the family restaurant and hotel business in 1862. In 1890, Gilbert and his brother, Louis, took over. In 1895, the company began producing A1 Steak Sauce. The family is also known for creating the first premixed cocktail bottles. The company expanded to include a hotel in downtown Hartford, the acquisition of Grey Poupon, and a much larger liquor distribution.

In 1875, Heublein proposed to Louise M. Gundlach who was the daughter of a prominent Hartford German American businessman. During a hiking excursion on Talcott Mountain, Heublein promised his soon-to-be bride that he would one day build her a German-style mansion atop the mountain.

As promised, in 1914 Heublein built a six-story, German-style mansion atop Talcott Mountain. Known now as Heublein Tower, the home served as a summer retreat and entertainment venue for weekend guests. The Tower was state-of-the-art, built to withstand winds gusts of more than 100 miles per hour. It included a five passenger elevator considered to be the first home elevator in Connecticut.