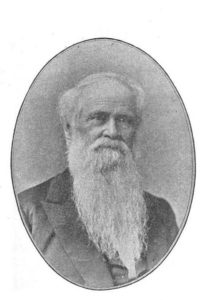 Born in Hartford, Henry Barnard attended Hopkins Grammar School, Monson Academy, and Yale College. After Yale, he prepared for the law and was admitted to the bar in 1836.

In 1837, Barnard began representing Hartford in the Connecticut Legislature. During his three-year tenure, he spearheaded an act to provide better oversight of schools. This act resulted in the creation of the Board of Commissioners of Common Schools. He accepted the position of Secretary of the Commission.

Barnard continued his career in education in Rhode Island, Wisconsin, and Maryland. In 1867, he accepted the position of United States Commissioner of Education. He was the first person to hold this office.

Elizabeth Colt commissioned Barnard to supply text for Armsmear: The Home, the Arm and the Armory of Samuel Colt, A Memorial. Conceived in 1862, the 400-page biography, lavishly illustrated and bound, was printed in 1866.