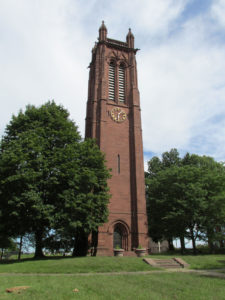 Rebecca arranged for her brother, Robert, to run the family business until the boys were old enough. As agreed, in 1830 Robert stepped aside and Walter and Henry took over.

Walter married Mary Jeanette Goodwin. They purchased a home on Main Street in which Henry, who never married, lived with them.

The brothers made charitable contributions to various institutions, including Trinity College. They donated land to the city of Hartford for what is now Keney Park.

To honor their mother, they set aside funding to erect a large a clock tower on the site of the family business and home. The memorial is unique in that it honors a woman whose greatest achievement was simply being a good mother.