Civil War Service, Healthcare
Back to all Notable Residents 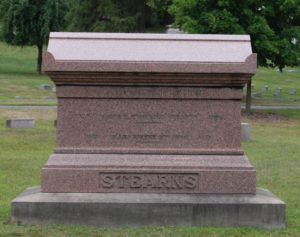 Henry P. Stearns received undergraduate and medical degrees from Yale before studying at the celebrated medical school in Edinburgh, Scotland. He served as house surgeon at the Royal Infirmary in Edinburgh before returning to Massachusetts to take up practice. He moved to Hartford in 1859.

During the Civil War, Stearns was appointed surgeon of the First Connecticut Regiment. He later served as brigade surgeon of United States volunteers, and on the staffs of Generals Grant and McClellan. He was promoted to medical director at Paducah, Kentucky; built and equipped the Joe Holt Hospital in Indiana; and served as medical director of the northern wing of the Army of Tennessee. He mustered out of service in 1865 with the rank of lieutenant colonel.

Retreat for the Insane

In 1874, Stearns was appointed physician and superintendent of the Retreat for the Insane in Hartford. During his 31-year tenure he introduced many reforms. He was the first superintendent of an insane institution to successfully manage patients without subjecting them to mechanical restraint. He also successfully implemented the building of separate cottages for various forms of insanity at the Retreat.