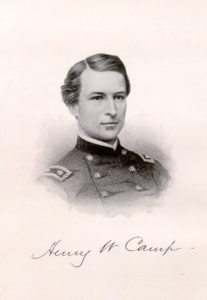 Henry Ward Camp was born in Hartford. After graduating with high honors from Yale in 1860, he studied law with John Hooker.

In July 1863, following the assault on Fort Wagner, Confederates captured Camp and his good friend, Chaplain Trumbull. He was taken to Charleston then Columbia, South Carolina. He escaped, but was recaptured. He was released in April 1864.

Camp returned to his regiment and was promoted to Major in September of that year. A month later, he was killed in action at Darbytown Road outside of Richmond.

Following the battle, the enemy stripped Camp’s body and buried his remains. The next morning, Camp’s fellow soldiers sent a message to the Confederates asking for his remains.

Chaplain Trumbull accompanied Camp’s body home. He was interred in Spring Grove Cemetery in north Hartford. He was reinterred at Cedar Hill Cemetery after it opened in July 1866.