Back to all Notable Residents 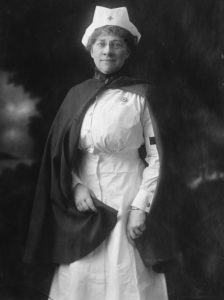 During World War I, she went to France with the Red Cross, serving as chief nurse at a children’s hospital. When she returned to the U.S., she was called to Washington where she organized a convalescent hospital for women in government service.

Butler returned to Hartford in 1938 to reenter local volunteer work. She directed nursing services for the Connecticut State Defense Council. At the beginning of World War II, she was named head of the associate committee of nurses of the Emergency Medical Service of the Governor’s War Council. She also led the nursing recruiting committee of the Hartford Red Cross.

Butler was awarded the Florence Nightingale medal by the International Red Cross Committee of Geneva in 1937 (highest award made to members of the nursing profession), the French Reconnaissance Medal, and the Connecticut Distinguished Service Medal.