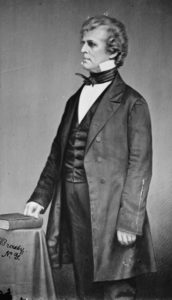 Isaac Toucey was born in Newtown, Connecticut. Following his general schooling, he studied law and began practicing in Hartford.

Toucey became involved in the Democratic Party when it formed in Connecticut. In 1822, he was appointed State Attorney. He held this position until 1835 when he was elected to the U.S. House of Representatives.

He ran for Governor of Connecticut in 1845 but lost. He ran again in 1846. With no candidate receiving 50% majority of the votes, the State Legislature elected Toucey into office. In 1847, Toucey did not receive the Democrats nomination to run for Governor again.

In 1850, Toucey was elected to the Connecticut Senate and in 1851 to the U.S. Senate where he settled until 1857 when James Buchanan was elected President of the United States.

U. S. Secretary of the Navy

Toucey returned to law in 1861. Having removed himself from politics, he lived a private life until his death in 1869.

While historians accept that Toucey inherited a navy that was inadequate and was denied funding, his inability to improve conditions while Secretary of the Navy tarnished his reputation.

In addition, when Toucey took the position, it was customary to deploy navy ships all over the globe. When an incident arose in Paraguay in 1855, President Buchanan requested, and Congress approved, an expedition of ships be sent to the area. While the incident was handled quickly and peacefully, these ships remained in the area of South and Central America until 1860.

When Abraham Lincoln took office in 1861 and was ready to commence what is now known as the American Civil War, it was determined that the U.S. Navy was not prepared to fight. Toucey was accused of supporting the Confederate Army by manipulating the placement of Navy vessels, such as those still in South and Central America, making them inaccessible for the purpose of the war.

An investigation in 1864 revealed that Toucey had created a plan in the event of war. In fact, it was President Buchanan who refused to implement it. While Toucey was cleared of all charges and even oversaw the Navy’s major accomplishment of laying the first trans-Atlantic cable (1858-1859), the damage to his career and legacy had already been done.