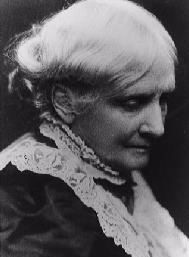 Isabella Beecher was born into the prominent Beecher family. She was the daughter of Rev. Lyman Beecher and his second wife, Harriet. Her older half-sisters included the author Harriet Beecher Stowe and education reformer Catharine Beecher. Raised in Litchfield, Boston, and Cincinnati, as a teenager Isabella was sent to Catharine’s Hartford Female Seminary.

In 1841, Isabella married lawyer John Hooker. Her long and respected career as a suffragist was launched in his law office. Upon reading William Blackstone with her husband, Isabella came across a passage that both horrified her and transformed her life.

According to Blackstone, marriage suspended a woman’s legal standing. In the eyes of the law, a wife had no rights independent of her husband. From that moment, Isabella dedicated her life’s work to the enfranchisement and empowerment of women.

In 1869, Isabella founded the Connecticut Woman Suffrage Association, serving as its director for 36 years. She planned women’s rights conventions throughout Connecticut. She also fought for a married women’s property bill. She introduced the bill to the State Legislature for seven years until its passage in 1877.


Connecticut History on the Web. Accessed at http://www.connhistory.org/isabella_readings.htm


Image is in the public domain from the Project Gutenbuerg archives.