Landscape Architect
Back to all Notable Residents 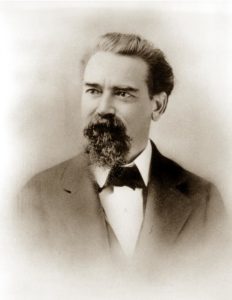 Born in Switzerland, Jacob Weidenmann enjoyed a comfortable upbringing. He studied art, architecture, horticulture, and engineering in Europe. After completing his studies, he traveled extensively. He visited Paris and London before sailing to New York City.

He panned for gold in the California gold rush. He then served as an engineer for a firm attempting to build a railroad across the Isthmus of Panama. He soon settled on his calling, landscape architecture. His first commission was for a large estate near Lima, Peru.

Weidenmann’s travels eventually brought him back to New York City. He set up a landscape practice and met contemporaries, Frederick Law Olmstead and Calvert Vaux. Today the three men are considered pioneers of landscape architecture.

Weidenmann came to Hartford on the recommendation of Olmstead, a Hartford native. As Park Superintendent, Weidenmann oversaw the development of Bushnell Park. The new park featured curving walks, undulating topography, and picturesque plantings.

In 1863, a group of prominent citizens asked Weidenmann to identify a location for a new cemetery. After selecting a site in Hartford’s south end, he served as Cedar Hill’s landscape architect. He laid out the burial grounds in a modern style. An innovative layout that was the principle for his book Modern Cemeteries (1888).

In 1868, Weidenmann began gathering material for a manuscript on landscape gardening. The resulting book, Beautifying Country Homes, contained two sections. The first was 40 pages on how to landscape suburban grounds and the second section included 24 plans.

When Weidenmann finished Beautifying Country Homes, he took leave from his Hartford responsibilities. He left for a year, returning to the city in November 1871. He had hoped to resume his positions of superintendent of both City Park and Cedar Hill. Neither position was open. Instead, he worked on private commissions, including some with Frederick Law Olmsted.

Weidenmann advocated for the establishment of a professional school of landscape architecture. Today, Harvard University awards the Jacob Weidenmann Prize to the student who has shown outstanding ability in landscape design.

To learn more about Jacob Weidenmann, check out our video here.