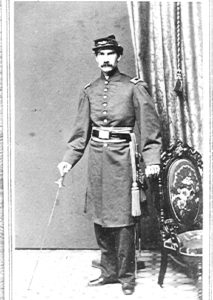 John Burnham was born in Tolland, Connecticut. He enlisted in the Hartford City Guard in July 1861 and served as secretary of the company in 1861 and 1862.

In July of 1862, President Lincoln requested 300,000 volunteers. Hartford and surrounding towns responded by forming the 16th Regiment, Connecticut Volunteer Infantry. Lt. Col. Burnham joined the 16th Connecticut. He stayed with the regiment throughout the Civil War.

In May 1863, Burnham was wounded in battle in Suffolk, Virginia. He returned to service only to be captured by the Confederates following the surrender at the Battle of Plymouth. He was first taken to Libby Prison in Richmond, Virginia. Then to Camp Ogelthorpe in Macon, Georgia and finally to Charleston, South Carolina.

Burnham was released in exchange for another prisoner. As luck would have it, while en route to his regiment, he was captured again. One evening, the Confederate captors were fired upon and Burnham was once again free to join his regiment. He continued to fight until the close of the war.

Returning to Hartford, Burnham continued his career in business. President Grant appointed him Deputy Postmaster of Hartford in October 1871. Then Postmaster in 1872. He left his job due to failing health in 1880.

Burnham’s physical and mental deterioration led to being admitted to the Retreat for the Insane in Hartford. With his health continuing to fail, he was moved to the State Hospital in Middletown.

Burnham died in 1883 from a general breaking down of his body both mentally and physically. He was 46 years old.