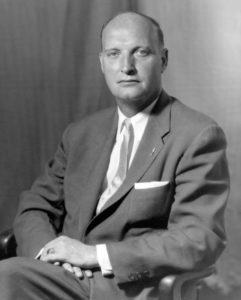 John M. Bailey was a prominent figure in Connecticut and U. S. politics.

A graduate of Catholic University and Harvard Law, Bailey was active in the Connecticut Democratic Party from 1946 until his death in 1975.

As Party chairman, he coordinated statewide election campaigns. He is credited with turning the state from one politically dominated by WASP Republicans to one led by Democrats of Catholic and Jewish descent.

Bailey masterminded Abraham Ribicoff ‘s gubernatorial campaign. Elected in 1955, Ribicoff was the first Jewish governor in the Northeast. And to date, the only Jewish governor of Connecticut.

Bailey served as Democratic National Chairman from 1961 through 1968.

Following the assassination of President John F. Kennedy in 1963, Bailey oversaw the greatest electoral landslide in U. S. history. In the 1964 election, Lyndon B. Johnson won 486 electoral votes and achieved supermajorities in both the U.S. House and Senate.