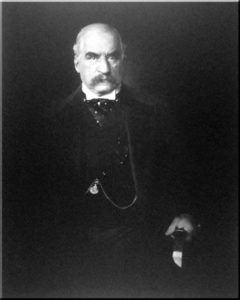 John Pierpont Morgan was born in Hartford. A graduate of Boston’s English High School, he went to Europe to learn French and German. He then moved to New York to work as an apprentice banker.

Morgan became an excellent banker and investor. With his father Junius, he funneled capital from Europe to the emerging American economy. He invested in the railroad industry and industrial corporations.

Morgan took over floundering organizations and reorganized them to make then profitable again. He was so successful that this process came to be coined “morganization.”

In 1895, President Grover Cleveland contacted Morgan because the Federal Treasury was nearly out of gold. In response, Morgan made an arrangement for Wall Street to supply the U.S. Treasury with $65 million in gold.

In 1901, Morgan bought out Andrew Carnegie and launched the U. S. Steel Corporation. This gave him control of almost half of the nation’s steelmaking capacity.

Also, at this time, the U. S. had no central bank. Morgan served as the country’s unofficial lender of last resort. In 1907, he stopped a major public panic in New York. He rallied fellow bankers to supply liquidity to shore up the endangered economy.

Although hailed a hero, some were appalled that one private citizen held so much power. This led to the establishment of a National Monetary Commission. And eventually to the founding of the Federal Reserve.

In 1913, Pierpont died in his sleep at the age of 76. Nearly 4000 condolence letters were received overnight at the Grand Hotel in Rome where he died. The body was taken by train to Paris and to New York by boat. A memorial service was held in New York and then he was brought to Hartford by private train.

At the time of his death, his estimated worth was $68.3 million, which today would be $1.39 billion.


The Morgan Library and Museum. History. Accessed at http://www.themorgan.org/about/history.asp