Artist, Civil War Service
Back to all Notable Residents 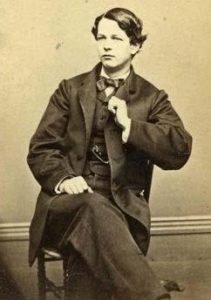 A native of Hartford, John S. Jameson was a talented musician and artist.

The son of an organist and singer, Jameson studied with several New York City music teachers. In 1859, he succeeded his father as organist of the Church of the Puritans in Union Square. He also performed at the Palace Gardens and Dodworth’s Hall in the city.

At age 13, Jameson’s drawing of his grandmother gained the attention of several artists including noted landscape painter Frederic Church. He soon began attending classes at the National Academy of Design.

In 1860, Jameson exhibited landscape paintings at the Artists’ Fund Society and the National Academy of Design. He continued painting and exhibiting until late 1863.

With the outbreak of the Civil War, Jameson expressed interest in joining the war effort. Friends discouraged this, citing his delicate health and obligation to his widowed mother. He enlisted in the First Connecticut Cavalry in January 1864.

Refusing administrative duties, Jameson served in Maryland and Virginia. He was captured and eventually sent to the prison camp at Andersonville where he died in August of 1864.