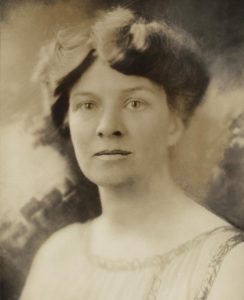 Born in upstate New York, Katharine Houghton was the oldest of three daughters. She graduated from Bryn Mawr College, receiving an A. B. in history and political science (1899) and a M.A. in chemistry and physics (1900).

Katharine met her husband, Thomas Hepburn, when he was a medical student at Johns Hopkins School in Baltimore. Katharine was teaching at the city’s Calvert School. They married before moving to Hartford where Thomas began his medical career in urology at Hartford Hospital.

In 1907, after attending a lecture by British suffragist Emeline Pankhurst, Katharine became an active champion of women’s rights. With a few close friends, in 1913, she organized the Hartford Equal Franchise League. In addition to votes for women, the League fought for a federal ban on child labor, pensions for mothers, and education reform.

Katharine served as president of the Connecticut Women’s Suffrage Association and was on the board of a national suffrage organization. In 1916, she appeared in a debate at Carnegie Hall with Lucy Price, an ardent opponent of women’s suffrage.

With the ratification of the 19th Amendment (1920), Katharine shifted her political focus. She became involved with the birth control movement for which she was well known.

In 1873, the federal Comstock Law made it illegal to sell or distribute materials that promoted contraception. Connecticut passed a state law in 1879 that banned the use of contraceptives altogether. This notorious anti-birth control law was ridiculed by Katharine as the “police-under-the-bed law.”

Katharine joined her friend, Margaret Sanger, founder and leader of the American Birth Control League. For many years she served as the League’s legislative chair, speaking at rallies and before the U.S. Senate.