Advocate, Artist
Back to all Notable Residents 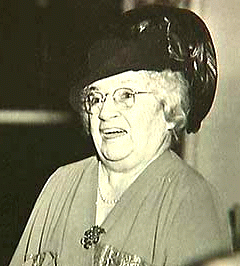 Born in Hartford, Katharine Seymour Day was the daughter of prominent attorney John Calvin Day. She was also the granddaughter of suffragist Isabella Beecher Hooker and grandniece of anti-slavery novelist Harriet Beecher Stowe.

As a child, Day studied with private tutors and attended Hartford Public High School. When she was 17, she moved to Europe with her family. While in Europe, Day’s interest in modern art blossomed. In Paris she took classes at the Atelier Moderne, learning to paint in the Neo-Impressionist and Pointillist styles.

When the family returned to the U. S. and settled in New York City, she studied under the well-known artist William Merritt Chase. She took courses at Columbia University and Union Theological Seminary. She eventually returned to Paris on her own to join the Academie Julien.

At her father’s death (1899), Day returned to New York where she lived with her mother. She continued her art education, spending summers at an art colony in Gloucester, Massachusetts.

In 1915, Day moved to California where she painted and took summer courses at the University of California – Berkeley. At Berkeley she decided that she needed a college education.

At age 47, Day returned to the east coast to enroll as a freshman at Radcliffe College. Because of her age she was accepted on a provisional basis. Majoring in psychology, she completed her undergraduate work and received a Master’s degree in only five years. A particular interest was the psychology of color and its relation to new painting techniques.

In 1924, Day purchased the Harriet Beecher Stowe House in Hartford. While living in the city she pursued her interest in painting, as well as gardening. She also continued to study. She received a graduate degree in history from Trinity College in 1936, when she was 66.

Day also focused her time and energy on social activism. Always politically active, she marched for women’s suffrage in New England, New York City, and London. When she was living in New York, she helped organize the efforts of the Women’s Municipal League to end the politically corrupt rule of Tammany Hall.

In Hartford, Day focused on a variety of issues. As a public health advocate, she called for an end to the open burning of garbage and the construction of city incinerators. She worked to restore the Corning Fountain in Bushnell Park and helped create the Children’s Museum of Hartford.

She was active in the effort to relocate the Wadsworth Stable from Hartford to Lebanon to save it from destruction. And she organized the Friends of Hartford to prevent the Mark Twain House from being razed for development.

Day created and generously endowed the Harriet Beecher Stowe Center. She saved not only the Stowe home, but also the house next door, and the important papers of the Beecher, Stowe, Hooker, and Day families.