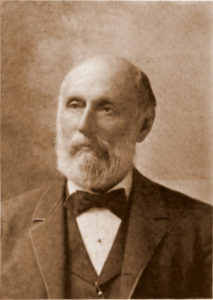 Leverett Brainard was born in Colchester, Connecticut. In 1853, he moved to Hartford to assume the role of the first Secretary of the City Fire Insurance Company.

Brainard’s most notable business venture was entering the partnership of Case, Lockwood & Co, a prominent Hartford printing and publishing house. Eventually known as Case, Lockwood & Brainard, it became one of the largest printing companies in New England.

Brainard also served as president of the Hartford Paper Company, director of the Aetna Life Insurance Company, and chairman of the Committee of Railroads. He also served as mayor of Hartford from 1894 until 1896.

During the Civil War, Brainard paid Michael Kelley, the son of an Eastford, Connecticut farmer, $350.00 to serve as his substitute. This was perfectly legal at the time, and there was a “certificate of exemption” issued to Brainard and a “form of assent” for Kelley to allow the exchange.