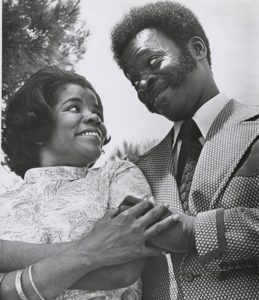 Louise Stubbs was born in Chicago where she received her early theatrical training. She earned a Bachelor of Fine Arts from Goodman Theatre before moving to New York in 1952. During her career, she appeared in over 50 plays, television shows, and commercials.

Stubbs was one of a group of Black actors including Ossie Davies, Ruby Dee, Harry Belafonte, and Sidney Poitier who found it increasingly possible to work in theater in the 1950s.

In the 1960s, she was part of the cast of the American production of Jean Genet’s controversial play The Blacks. This play featured a new generation of Black performers including James Earl Jones, Maya Angelou, Louis Gossett, Jr., and Cicely Tyson.

In 1965 and 1966, Stubbs was one of the few Black actors to be seen regularly on American television, playing the role of Carol on the soap opera Guiding Light.

In 1971, she was cast in the role of Mama Rosie in the off-Broadway stage production of Black Girl. The movie version followed a year later.