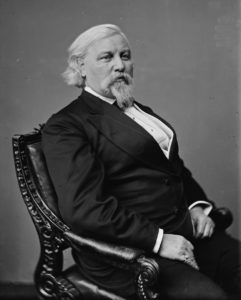 Apprenticed as a tanner, Marshall Jewell took over his father’s tanning business in 1850.

His father, Pliny, moved to Hartford from Winchester, New Hampshire in 1845. He operated a tannery and leather shop in the city. Pliny’s greatest contribution to the manufacturing world was introducing leather belting as a mechanism for conveying power in place of costly and cumbersome gearing systems.

As business expanded, four of Pliny’s five sons joined him in the company that became known as P. Jewell & Sons. Led by Marshall, the company amassed substantial wealth during the Civil War as the price of leather increased significantly during that time.

In 1873, President Ulysses S. Grant appointed Marshall Minister to Russia. He resigned from the position after only seven months. He then served as Postmaster General from 1874 until 1876.