Aviation
Back to all Notable Residents 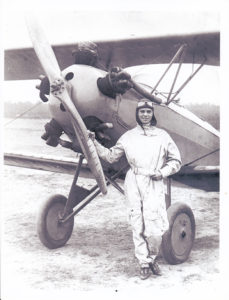 In 1929, Jenson was a charter member of the Ninety-Nines, an organization created to provide support for women in aviation. She piloted a Fairchild KR-21 bi-plane and made history as the first woman to fly solo to Cuba.

Jenson was the only female passenger of the Hindenburg when it flew over Hartford in 1936. She served as director of the Betsy Ross Corps, a group of female pilots organized to assist in national defense.

Jenson also worked in advertising and promotion, working for Walt Disney Productions in Hollywood for a brief time in the 1930s. At Disney, she met her husband, Carl Jenson, with whom she had two children.

The family returned to Wethersfield where Jenson served on the Board of Education, the Republican Town Committee, the Council of Social Agencies of Greater Hartford, and as President of the Women’s Association.