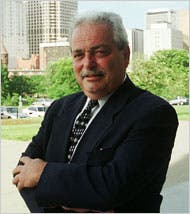 Michael P. Peters grew up in Hartford’s Italian, working-class south end. After high school, he became a fireman. He served the city of Hartford in this capacity for 22 years.

In 1993, Peters took on the challenge of running for mayor of Hartford. As a Democrat, he ran against incumbent Carrie Perry in the primary and lost. Unwilling to give up, he ran as an independent in the November election and won.

Peters was seen as Hartford’s greatest cheerleader. His motto, “Go, Hartford” was a reflection of his hopes for the city. His accomplishments included reducing crime and drug trafficking, supporting revitalization projects, and developing a child abuse prevention program. He was named one of the top 10 public officials in the nation in 1996. After nearly a decade as mayor, Peters announced he would not run again in 2001.

Following his service as mayor, Peters continued to support the city of Hartford by opening a restaurant downtown. The quaint restaurant, which could easily remind patrons of TV’s Cheers, was appropriately named Mayor Mike’s.