Athletics, Business, Politics
Back to all Notable Residents 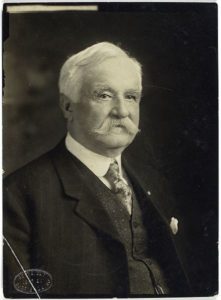 During the election of 1888, Democratic candidate Luzon B. Morris received the most votes. But neither Morris nor Bulkeley obtained more than fifty percent of the vote as required. The Republican Legislature decided the governorship in favor of Bulkeley.

Two years later, there again was no clear-cut gubernatorial winner. Bulkeley had not run for the position. Instead, he abided by the unwritten rule preventing a Republican governor from seeking a second term. Bulkeley responded to voter indecision by refusing to relinquish the Governor’s office.

To encourage Bulkeley to resign, the State Comptroller chained and padlocked the Governor’s office. Bulkeley handled this by using a crowbar to gain access. This earned him the nickname “Crowbar Governor.”

The Legislature then refused to pass funding for state operation costs. Bulkeley handled this by using funds from Aetna Insurance, of which he was president.

After considerable angst, the Legislature finally succumbed to Bulkeley’s leadership. He served as Governor of Connecticut for a second two-year-term.

In 1874 and 1875, Bulkeley served as president of the Hartford Dark Blues, a baseball team of the National Baseball Association. In 1876, he was elected as the National League’s first president. He was elected posthumously to the Baseball Hall of Fame in 1937.