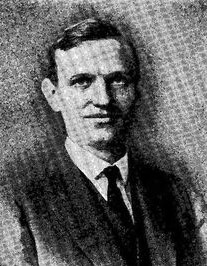 Newton Case Brainard was born in Hartford, the son of Leverett and Mary Brainard. After graduating from Yale in 1902, he entered his family’s printing business.

Brainard was associated with Case, Lockwood & Brainard, and its successor, Connecticut Printers, for over sixty years.

He began his career as an assistant secretary of the company. He served as president from 1910 until 1952 when he became chairman of the board of directors.

Case, Lockwood & Brainard was one of the largest printing companies in New England.

A lifelong Republican, Brainard served as Alderman of Hartford. His first term was interrupted in 1917 by World War I. After he was discharged from the Army, he was reelected.

In 1920, he was elected Mayor of Hartford, serving a two-year term. He did not seek reelection because of the demands of his printing business.

Brainard was an ardent supporter of the erection of a municipal airport. With the interest in developing a mail route between New York and Boston, Hartford was considered an ideal location for an airport.

Brainard Field, located in the south meadows of Hartford, was named in his honor and dedicated in 1921. Prior to Brainard Field, aviators would land at Goodwin Park, across from Cedar Hill Cemetery, as needed.